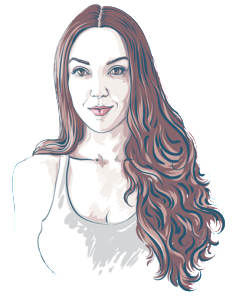 Constantly inspired and driven mad with ideas, Adrianna found it difficult to catch her breath. She moved to America with her family at the age of five. She was born in Poland, a world she’d like to see more of. Growing up in Brooklyn she had friends of different ethnicities all living on the same block. Variety entered her life in a beautiful way.  As a child she wanted to be an opera singer, inspired by the moments when she’d be locked behind glass shower doors that her brothers tied with a jump rope as a joke. She grew up listening to No Doubt and hung pictures of Gwen Stefani proudly on her walls. In a time of difficulty Adrianna says that No Doubt taught her happiness. Having suffered from anxiety and depression for most of her youth meant being distant even from the people closest to her. Unable to make sense of her emotions, she was constantly at war with herself. She gravitated towards what she loved and graduated from CUNY Baruch with a degree in Journalism & Creative Writing. She writes under the pseudonym Cheyenne Burroughs, inspired by an appreciation of Native American culture and her favorite author Augusten Burroughs. She seeks to contribute to others by providing the hope she never thought she’d have. She is an advocate of psychopharmacology as well as cognitive behavioral therapy. She feels that everyone could benefit from a safe environment, which a mental health professional can provide, in which they can reflect. She often credits the idea for SoulDoctors for saving her life.

“As a teenager I was certain I knew what God was, what consciousness was. But assuming such can be a dangerous thing for life will surely humble you. You can’t quite know God but you can know God through you; Because that’s how this life was designed: To be perceived by you, not outside of you or without you. Whatever purpose you find, if it serves man well, pursue it. If you are served with a purpose you are more lucky than most. If you don’t have a purpose, assign yourself one. But remember, it’s not all about you. In this bubble of unexplained phenomenon it’s about how the whole functions with the parts, together.”